In an Interview Hasan Ali, graduate of the Stewards of Cultural Heritage – Scholarship Program for Syrian Experts in Turkey speaks to L.I.S.A. about his project on „Syrian Badia History. Oral History A source for cultural and natural heritage documentation“.

In response to the massive destruction of the Syrian Cultural Heritage, with the overall aim of safeguarding this heritage and as a part of the „Stunde Null – A Future for the Time after the Crisis“ project, the German Archaeological Institute (DAI), Istanbul Department, launched the „Stewards of Cultural Heritage- SoCH“ project in October 2016. The SoCH project was a 24 months program, which was cofounded by the Gerda Henkel Foundation.

Five Syrian heritage specialists (archaeologists, architects, etc.) based in Turkey, were chosen to carry out their own proposed projects within the framework of their training and in preparation for post-conflict period in Syria. 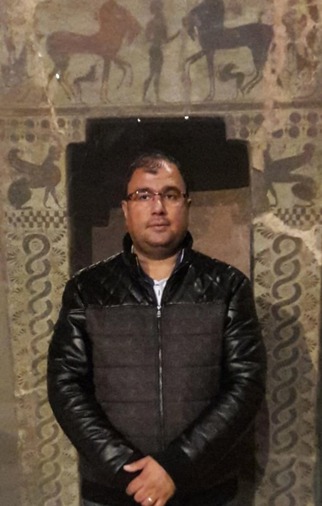 Mr. Ali in the Istanbul Archaeology Museum, in the background is a fresco on a funerary bed from Egypt.

L.I.S.A. asked them about their work within the SoCH program and their plans for the future. The first interview of this series is with Mr. Hasan Ali about his project „Syrian Badia History. Oral History A source for cultural and natural heritage documentation“ (Case study Hasan Ali (1.48 MB)).

Ali: My project is about the use of Oral History as a source for cultural and natural heritage documentation. My work was focused on the Eastern sector of the territory of Palmyra of the Syrian Steppes (Badia). For the purpose of this documentation, I relied on conducting interviews with the local population of the Syrian Badia, who have been displaced during the conflict and have settled in several Turkish cities (especially southern cities). I was able to conduct 100 interviews in total with different categories of the local population. Therefore, these interviews were abundant in information.

I then gathered the information into one file for each natural or cultural site. The file includes a site card, pictures, charts, an audio file…etc. As a final product of my research, the results (except the audio file, which is not accessible to the public) were collected in an interactive map, offered online in English and will soon be translated into Arabic. The purpose of the map is to give the opportunity to first access the information about the sites and allow the local population to add further information about sites they are familiar with. This is the link for the interactive map. I was interested in the chosen topic because with it I managed to fulfill my dream in documenting the heritage of the Syrian Badia, which has been partially neglected for many years in comparison with the antique city of Palmyra.

Ali: In fact yes I did, which are summarized in the following: reviewing the literature on the topic, I found that most previous experiences have regularly used oral history to document archaeological and natural sites interviewing people directly on site. However, in my case I used oral history to document archaeological and natural sites far away from the site, as none of the sites was accessible due to the armed conflict in Syria. I relied on conducting the interviews with the displaced people from those areas, who arrived in Turkey. The interviews with these refugees provided information about the cultural and natural heritage in the Eastern Sector within the territory of Palmyra of the Syrian Badia through the memories of these people. 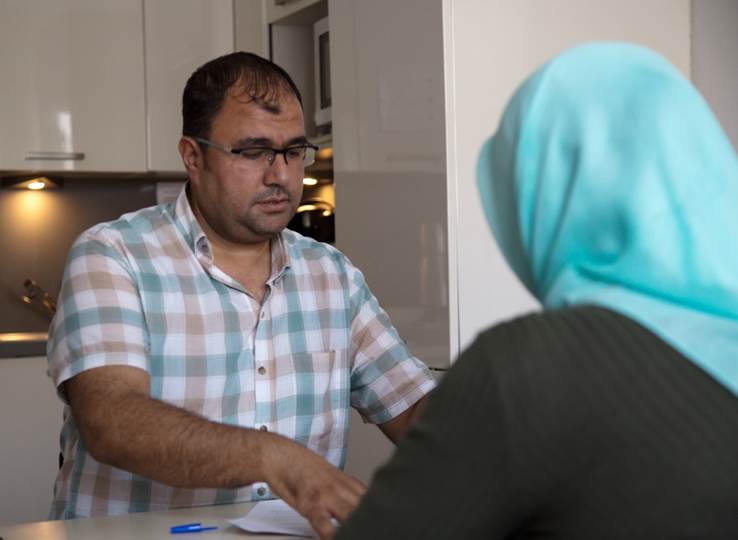 One experience of using oral history of memory in social and historical studies is the research conducted by Alexander von Plato on the experiences and memories of slave workers in Nazi-occupied Europe. However, there are no experiences in using oral history of memories in the documentation of archaeological and natural sites. This required creating a new method, to use the memories of the displaced people, whom were interviewed far away from the sites for the purpose of site documentation. The methodology was a combination of different oral history documentation experiences, with the basis of my experience in archeological surveys during my seven years of work for the antiquities department in Palmyra.

Ali: Difficulties and challenges in work and their impact on the schedule were: While searching for witnesses, many of them refused to be interviewed for personal reasons (for example some women did not want to be interviewed), which requires more time and effort to search for alternative witnesses. Some witnesses were reluctant to give important information, as they were afraid of the political impact that such information might have, which can jeopardize their security. This led to a certain shortage in the amount of information.

„Some witnesses were reluctant to give important information, as they were afraid of the political impact“

Through intensive inquiry, a large number of Bedouin and hunters, who have a rich memory of the Syrian Badia, have been displaced to refugee camps in Jordan, which is inaccessible for me at the moment. Solutions to these challenges and difficulties were: Intensifying the effort in the search for witnesses, so that as many people as possible are available, reducing the impact of the rejection of some.
During the interviews, I was keen to reassure the witnesses by telling them that these interviews were not to be published publically. But is a part of an oral history database prepared for scientific reasons. This is how they were reassured and started speaking more freely, without fear.
However, about the Bedouin and the hunters who have been displaced to refugee camps in Jordan, I could not travel outside Turkey to conduct interviews with them and I was satisfied with a few of those who were spread in the Turkish cities

Ali: In the near future I am planning to work in the field of archaeological research, doing further research on Syrian heritage in the territory of Palmyra. I have also appreciated the experience of working in restoration and conservation projects and therefore would be glad if I can manage to combine this research with work in restoration of archaeological site in Turkey. For the distant future I am planning to continue my education and apply for a Master’s program then hopefully a PhD. I intend to continue with my passion for teaching, especially about the relationship between oral history and archaeology with regards to the application of oral history for the documentation of heritage.

„I intend to continue with my passion for teaching“

I seek to apply the experience I gained from this research project in the documentation of cultural and natural heritage sites in other Syrian territories and perhaps even other countries, especially those experiencing armed conflicts.