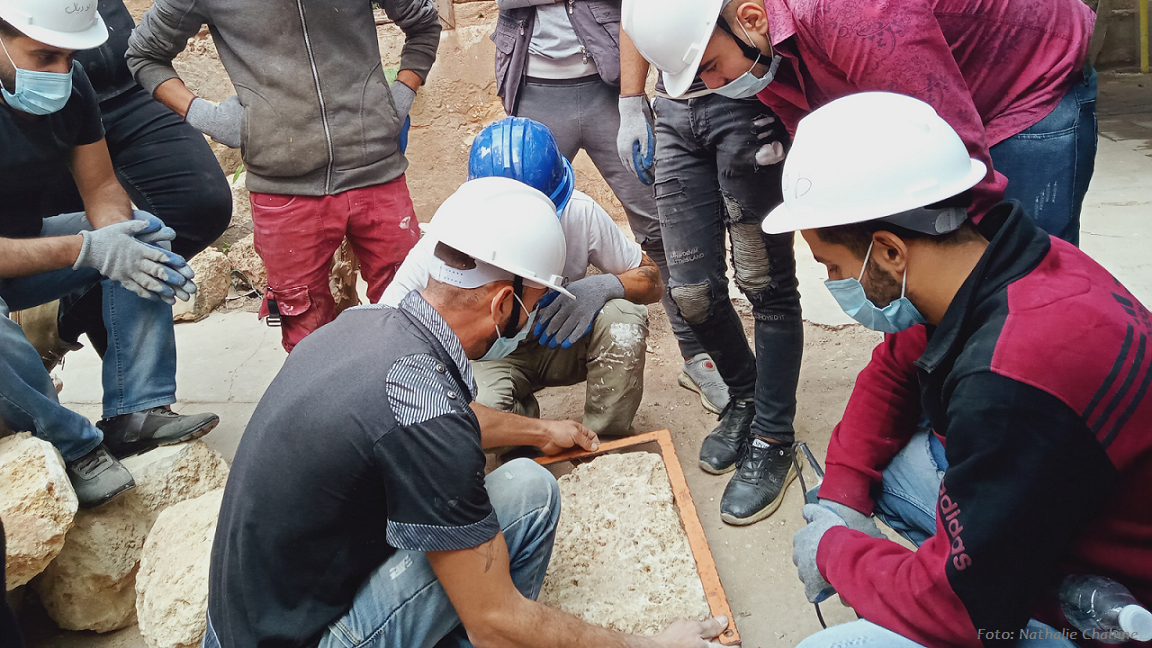 An on-the-job training programme was launched in October to provide instruction in traditional techniques of craftsmanship for masons, joiners and metalworkers. The training is centred on the building at Medawwar 749 in the Old Town of Beirut.

On 4 August 2020, the Lebanese capital Beirut was shaken by a massive explosion in the port. It caused many fatalities and devastation in several districts, affecting houses, public buildings and a great number of old central-hall buildings that are so characteristic of Beirut.
Around 1,000 historical buildings were damaged, 93 of them so severely that they require thorough restoration. Not only do the owners lack the financial means, but also craftspeople with traditional building skills and knowledge of working with historical materials are exceptionally rare in Lebanon these days.

On-the-job training
As a result, an on-the-job training programme has been under way since 25 October 2021 for masons, joiners and metalworkers, passing on traditional techniques to 25 interested participants in all. It focuses on the house at Medawwar 749. The building’s fragile condition furthermore is being used to train structural engineers in the specific features of the construction of these traditional buildings. This part of the project is being organised by the structural engineering firm of Axel Seemann, Berlin, which supervises restoration projects on historical architecture all over the world. Its engineers travelled to Beirut just a few days after the blast along with representatives of the KulturGutRetter project to assess the damage and coordinate emergency measures. That operation was the basis of the programme now being conducted.

On 17 November 2021, the ambassador of the Federal Republic of Germany in Lebanon, Andreas Kindl, paid a visit to Medawwar 749 to inspect the house and the training programme. The project is key to rapid progress being made in the rehabilitation of other damaged buildings in Beirut, because at the present time in Lebanon there are only two or three craftspeople per specialisation who are able to perform this kind of restoration work professionally. The aim is therefore to teach these virtually forgotten techniques and thereby ensure that, thanks to a fairly large number of craftspeople with the proper training, the restoration of the many buildings damaged by the blast can proceed rapidly and in line with heritage conservation standards.

The training project at the Medawwar house
The building at Medawwar 749 in the quarter of Gemmayze is one of the oldest buildings in Beirut. Its building fabric is still largely original, and what’s more the building is architectural testimony of Beirut’s urban expansion beyond the city walls. As such it is a protected monument. The catastrophic explosion almost completely destroyed windows, doors and the typical triple arch and balcony structure. In addition, the walls crumbled in places, the roof framework was badly damaged, and the typical “Baghdadi” ceiling constructions made of wood, straw and painted plaster collapsed.

Organisation of the training programme
The Orient Department of the German Archaeological Institute, with funding from the Cultural Preservation Programme of the Federal Foreign Office, is supporting the project, which was initiated by Lebanese architects from the Beirut Built Heritage Rescue collective and is implemented under the auspices of Lebanon’s Directorate General of Antiquities. The aim is to give house owners, NGOs and institutions more freedom of action by increasing the pool of properly trained specialists available.

Some of the craftspeople are under the supervision of March, an NGO that already has considerable experience in the rehabilitation of the historical buildings and the social structure of the affected districts of Beirut. Deployment in ongoing and planned restoration work is consequently a further aim of the project.