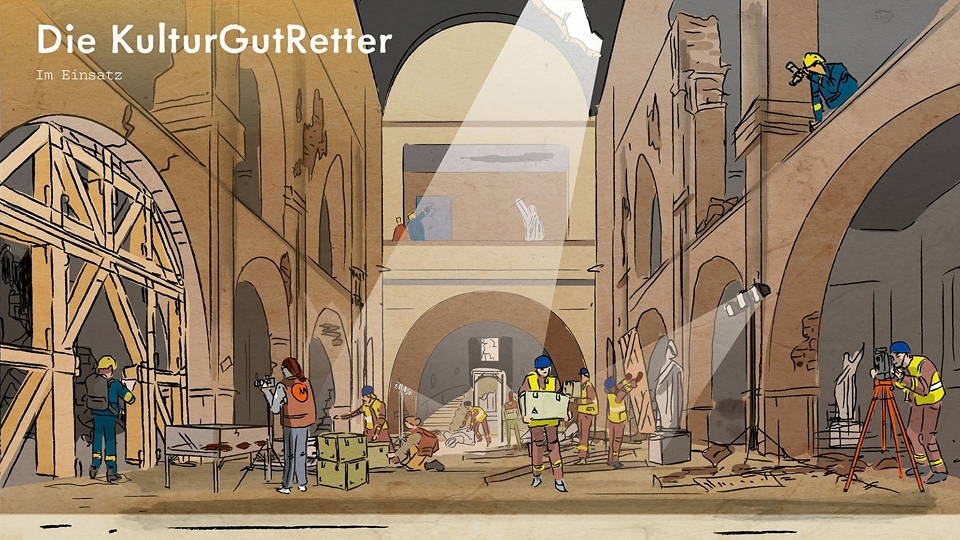 The sixth Lange Nacht der Ideen (“Long night of Ideas”) took place on 7 June 2021, under the heading Wie bald ist morgen? (“how soon is tomorrow?”). At the event the cultural heritage rescue unit KulturGutRetter presented its project KulturGutRetter in Action – Demonstration of an Emergency Salvage Operation.

The German Archaeological Institute opened its doors digitally to give a first impression of its work on the project KulturGutRetter (KGR) – An Emergency Mechanism for Cultural Heritage in Crisis Situations. Crises in the past, such as earthquakes, floods and fires have shown how quickly cultural heritage can be put at risk. Climate change, with its greatly varying local impacts, also poses a wide range of threats to the cultural heritage of the past. A mechanism to protect and preserve cultural heritage effectively and sustainably in all phases of a future crisis, KulturGutRetter – a cultural heritage rescue unit – is currently under development at the German Archaeological Institute in collaboration with the Römisch-Germanisches Museum – Leibniz Research Institute for Archaeology (RGZM) and the German Federal Agency for Technical Relief (THW). In a contribution to the Lange Nacht der Ideen, the KGR team gave a very practical demonstration of how such a salvage operation might proceed in a future crisis.

The sixth “Lange Nacht der Ideen” took place under the heading Wie bald ist morgen? (“how soon is tomorrow?”). A number of participants presented innovative projects, initiatives and ideas, giving an impression of what the Foreign Office’s cultural relations and education policy is like once it is put into practice. The organizers asked questions such as: What does remembering mean – and what will it mean in the future? What will the school of the future be like? What do art and climate have to do with one another? And how do we save cultural heritage in the crises of tomorrow? The last question in particular could be answered by the specialists from the DAI who gave a report about the KulturGutRetter project.

During the conference #MenschenBewegen2021, the DAI President Friederike Fless and other participants discussed the results of the preceding BarCamp #Divers. #Digital. #Nachhaltig.

Next the video KulturGutRetter in Action was presented on the live page of the German Archaeological Institute. The animated film shows how a KGR salvage operation could unfold in the event of an earthquake.

Following that, the main programme was hosted in the studio on menschenbewegen2021.de, with all the participants joining by live video link. Finally at 9:38 pm there was a live transmission from the DAI. In an interview with Dr. Katja Piesker and Christoph Rogalla von Bieberstein spectators were able to find out more about the project and watch a demonstration of modular tables specially developed by the Römisch-Germanisches Museum – Leibniz Research Institute for Archaeology (RGZM) for the emergency conservation of salvaged cultural property.

To protect and preserve cultural heritage effectively and sustainably in all phases of a crisis, the essential requirements are well-prepared and rapidly available digital information as well as well-trained and competent decision-makers. There is at present in Germany no mechanism by which assistance can be offered globally while a crisis is at its height. For this reason, the project KulturGutRetter (KGR) – An Emergency Mechanism for Cultural Heritage in Crisis Situations was launched in 2019.

Tasks ahead include the conception and implementation of further rescue modules relating to mobile and immobile cultural heritage, the incorporation of the mechanism in existing logistical processes as well as testing procedures in real projects on the ground. 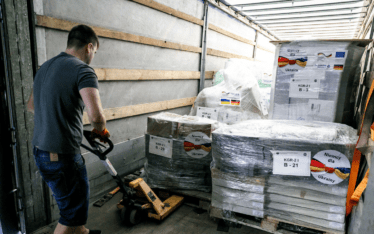 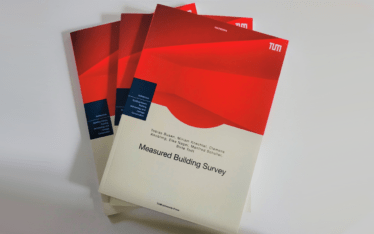