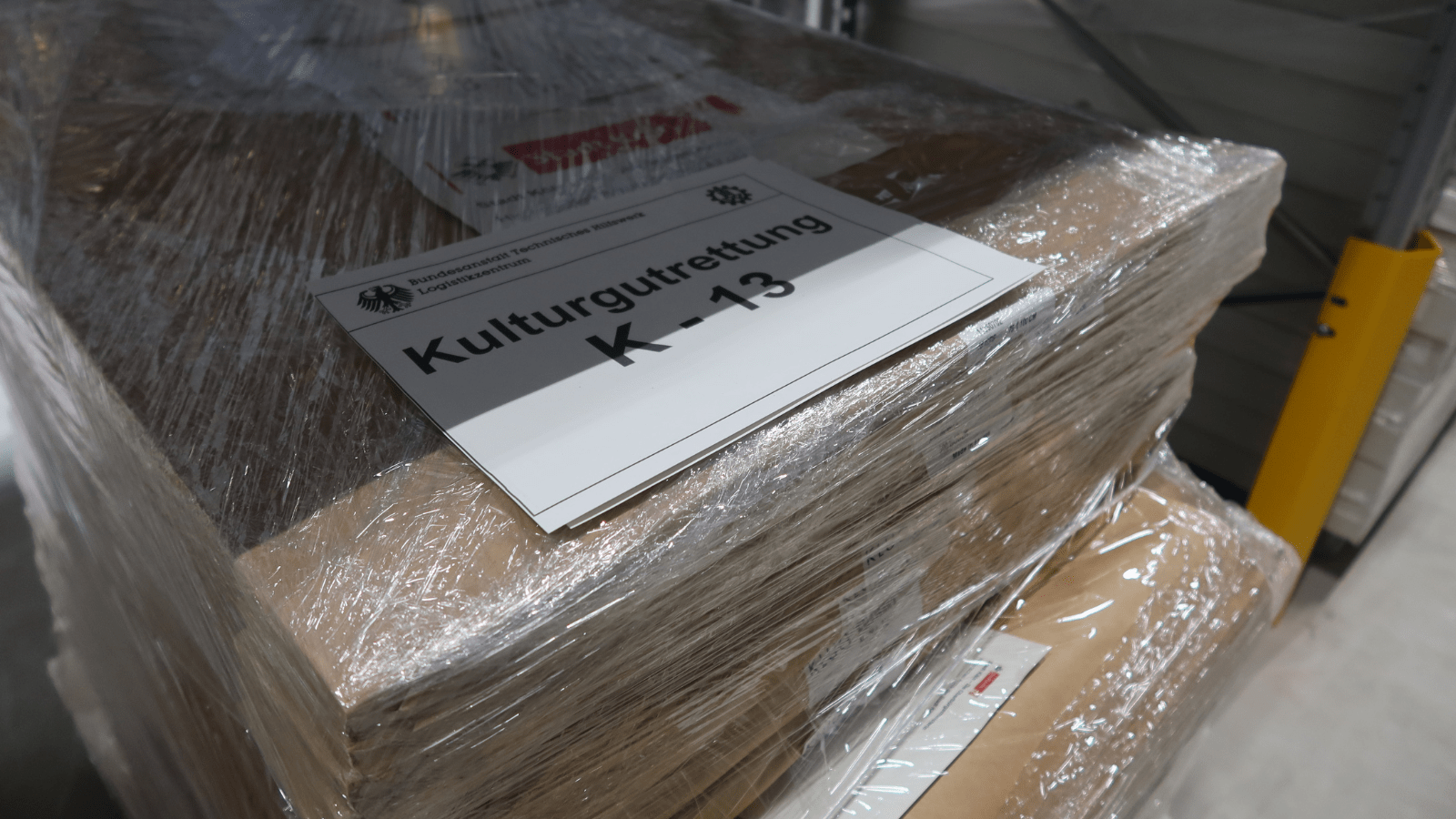 A delivery of aid from the Cultural Heritage Rescue Unit’s logistics network with about 10 tonnes of packaging material and supplies for the protection of collections, libraries, monuments and museums in Ukraine has reached Kyiv.

The delivery of archiving boxes, bubble wrap, sandbags, fire extinguishers, fire protection equipment and other materials was sent by German cultural institutions to colleagues in Ukraine with the aim of helping to safeguard the country’s cultural heritage. Another shipment reached Kyiv a few days earlier. Since the start of relief efforts in March this year, eight articulated lorries loaded with 242 pallets – weighing in total nearly 35 tonnes – of packaging material and other supplies have been dispatched to Ukraine through the Cultural Heritage Rescue Unit’s logistics network with the assistance of the German Federal Agency for Technical Relief (THW). The material will be used to erect protective cladding around monuments, to pack art objects and archaeological artefacts safely in boxes and to protect buildings and collections from fire, for example.

In order to be able to collect donated materials rapidly and effectively and ship them to Ukraine, the German Archaeological Institute (DAI), the Cultural Heritage Rescue Unit and the THW joined forces with Blue Shield Deutschland e.V., the DGKS (a registered association for cultural heritage protection) and the team behind the Guidelines for the Protection of Cultural Property (known by the German acronym SiLK) together with emergency response organisations in Munich, Stuttgart, Cologne, Halle/Saale, Weimar, Dresden and Berlin to set up a logistics network. Thanks to nationwide fundraising campaigns, it has been possible to raise considerable amounts of money and material donations for use in safeguarding Ukrainian cultural assets. The Cultural Heritage Rescue Unit, for its part, has provided advice to the collection centres, coordinated the transport logistics and forwarded the transport data to the THW’s logistics headquarters in Hilden. From there the materials were shipped to Kyiv, where they were distributed to the institutions concerned.

Being embedded in the EU Civil Protection Mechanism (UCPM), the logistics network is able to operate reliably and long-term. The aid initiative is integrated in measures being taken by the network Safeguarding Cultural Heritage in Ukraine, which was established by the  Federal Government Commissioner for Culture and Media in conjunction with the Foreign Office.

The  project KulturGutRetter (KGR) – An Emergency Mechanism for Cultural Heritage in Crisis Situations, also known as the Cultural Heritage Response Unit, is implemented by three partners: the DAI, the THW and the Römisch-Germanisches Zentralmuseum – Leibniz Forschungsinstitut für Archäologie (RGZM). The project was developed within the Archaeological Heritage Network (ArcHerNet).