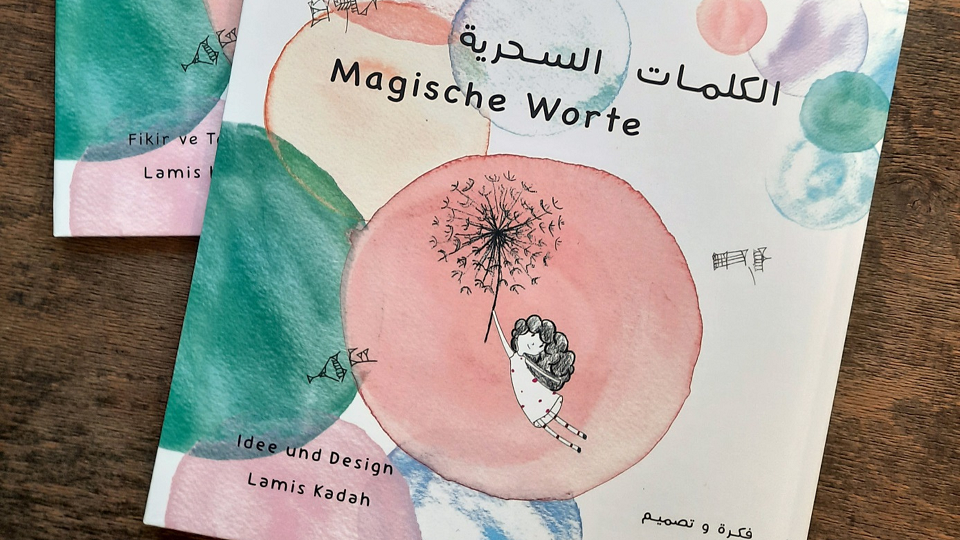 The picture book “Magical Words” takes its readers to the old Syrian kingdom of Ebla and invites them to discover the country’s cultural heritage.

The little protagonists travel through the past, where they get to know the ancient Syrian kingdom of Ebla. On their journey, the children discover the cultural landscapes of Syria, ancient palaces and the Eblaite cuneiform script.  With the help of illustrations, a glossary, and activities in the appendix of the book adults and children can learn more about the ancient language in a playful way.

The picture book is multilingual and available in a German-Arabic and a Turkish-Arabic version. With the multilingual editions, the author hopes not only to bring Syrian children closer to their own cultural heritage, but also to interest German or Turkish children for the history of Syria.

The author Lamis Kadah, who herself came to Turkey as a refugee, wants to give Syrian children, who had to flee from their homeland, access to their cultural heritage. The Syrian cultural heritage expert is an alumni of the programme Stewards of Cultural Heritage (SoCH), which gives Syrian experts the opportunity to receive trainings in the field of cultural heritage.

During the programme Lamis Kadah developed the idea for the children’s book and illustrated it after careful research. In an interview the author said:

“I think children deserve to know more about their heritage, they should be proud when someone asks them where they come from. They deserve to know how great their ancestors were; maybe they will return when they are older and rebuild their country.”

The author talkes about her book. | Video: Lamis Kadah.

The training programme “Stewards of Cultural Heritage” is intended for Syrian experts, who fled to Turkey. The programme aims to provide the scholarship holders with support in carrying out their own projects and developing new skills. The programme is hosted by the Istanbul Office of the German Archaeological Institute and as part of the project “Zero Hour” it is funded by the German Federal Foreign Office. The trainees are supported by stipends of the Gerda Henkel foundation.

Ebla, modern Tell Mardikh, located about 55 km (34 mi) southwest of Aleppo is one of the most extensive archaeological Bronze Age sites in west Syria. The archaeological research in the city of Ebla contributed to the enhancement of our understanding of the urban civilization of the 3rd millennium B.C. and of the Amorites Kingdoms of the first half of the 2nd millennium B.C. The discovery of Ebla’s cuneiform archives gave valuable insights into the history of the region and the Eblaite language. In the library of Ebla archaeologists found more than 17 000 cuneiform tablets just as they were left there by the ancient scribes. Currently this valuable Syrian archaeological heritage is threatened by looting, vandalism and destruction.

Both versions of the book (German-Arabic and a Turkish-Arabic) are available online.